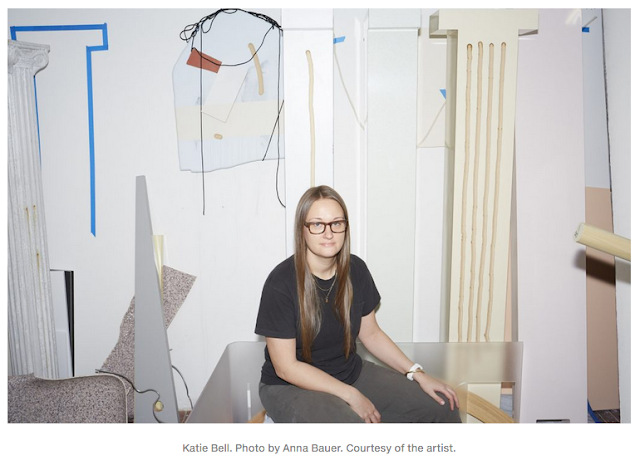 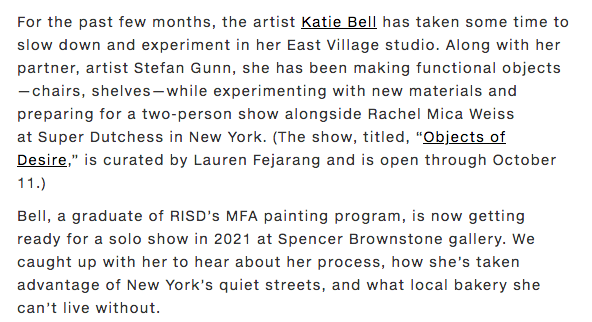 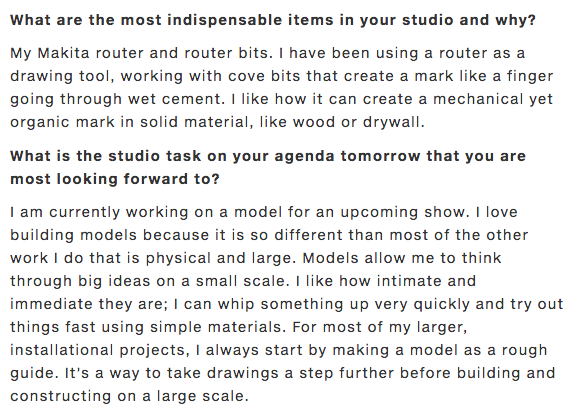 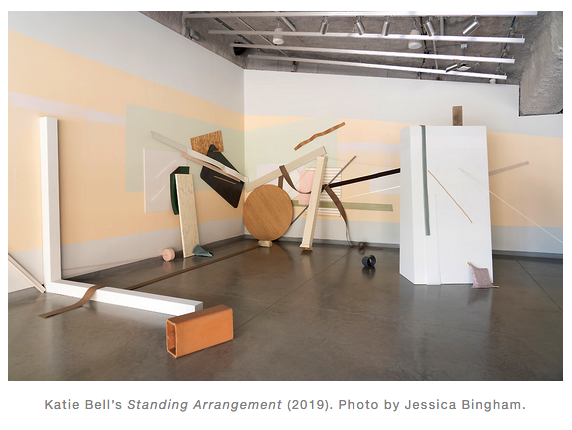 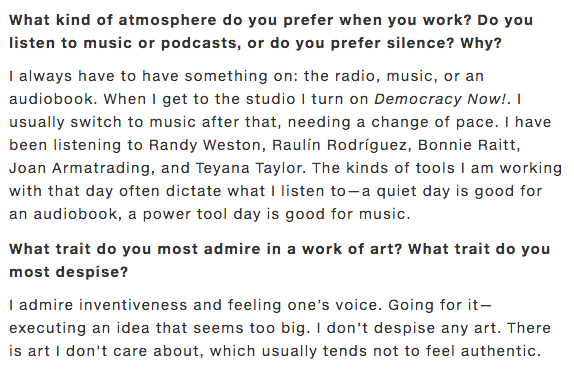 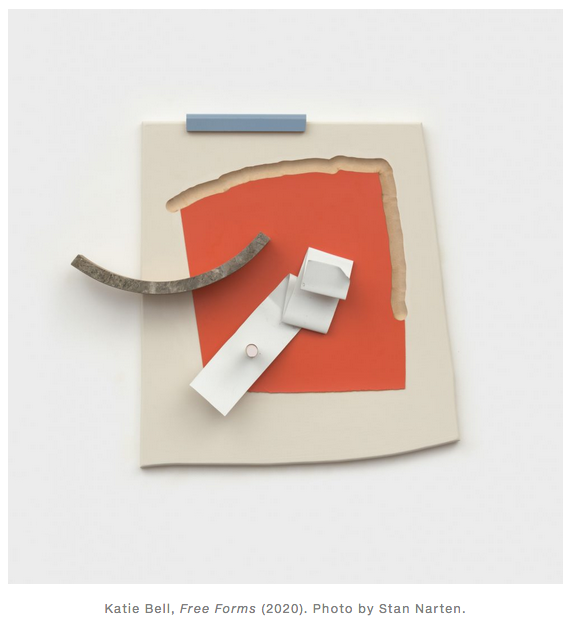 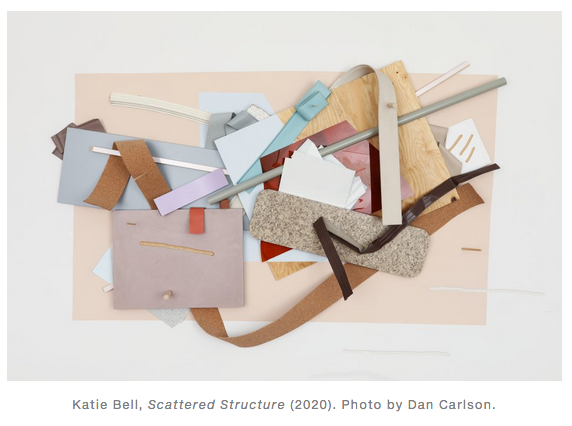 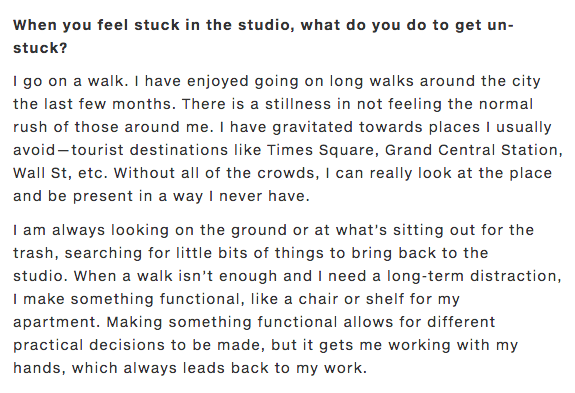 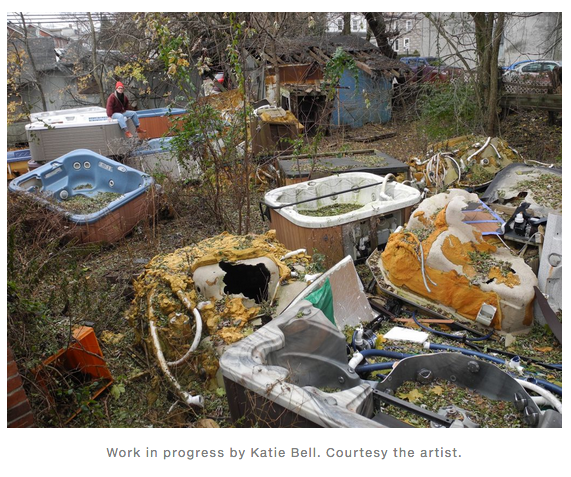 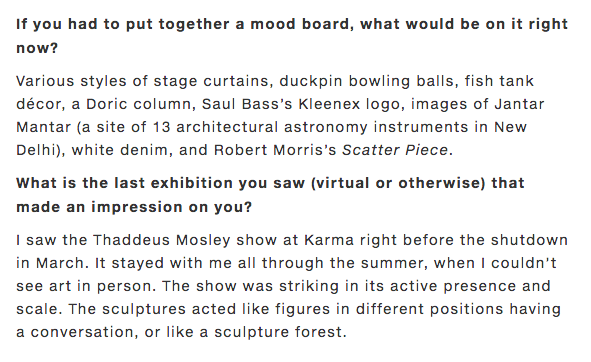 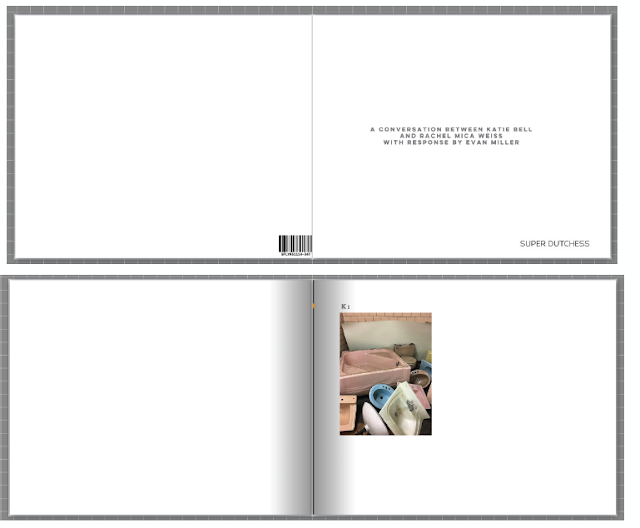 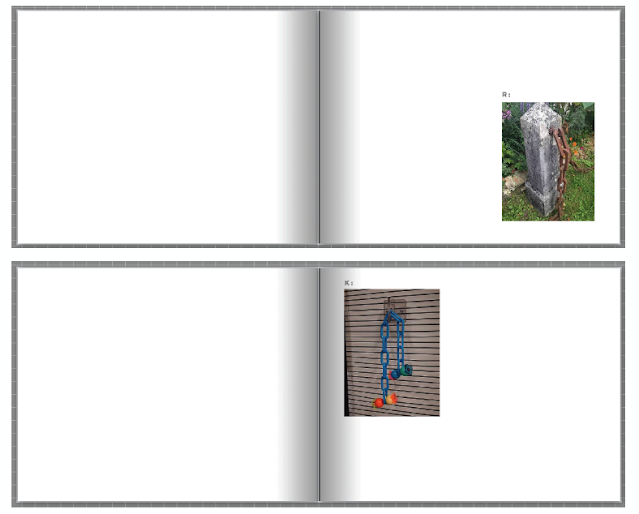 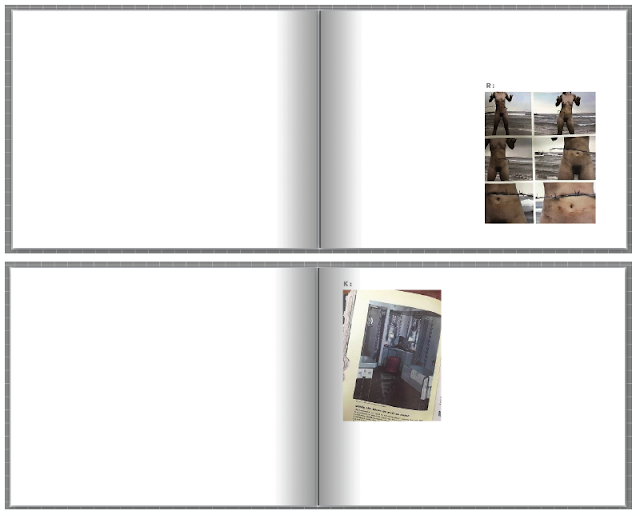 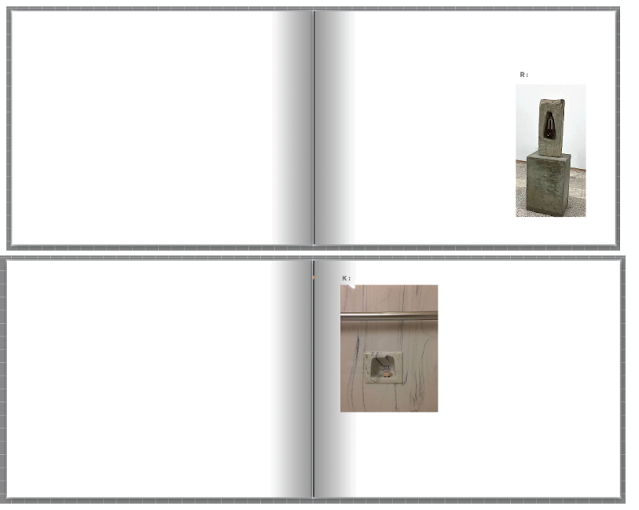 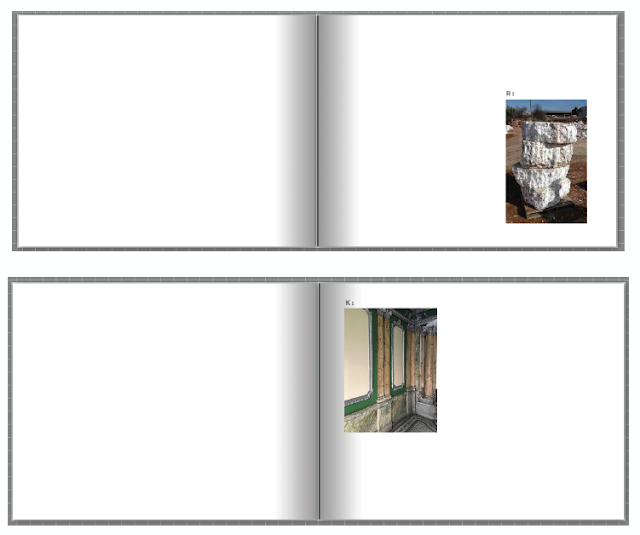 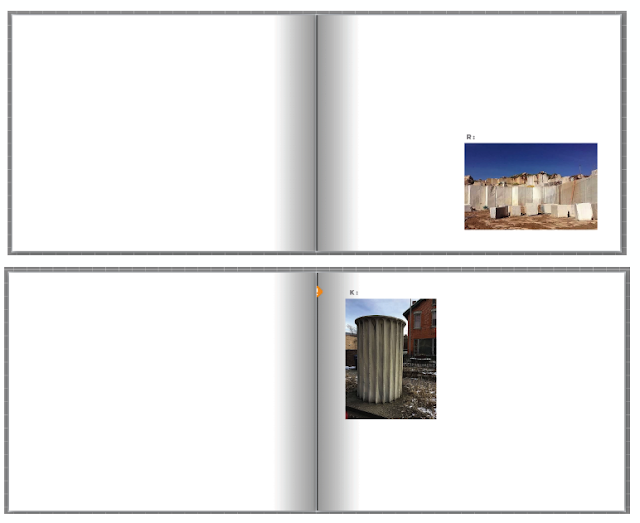 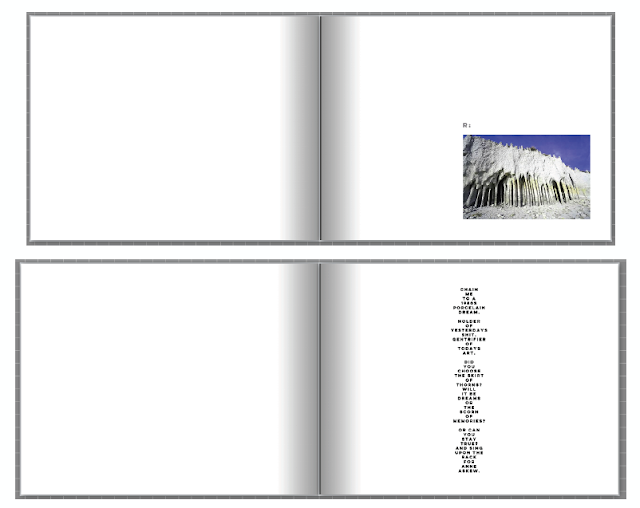 Press Release for 'Objects of Desire' at Super Dutchess 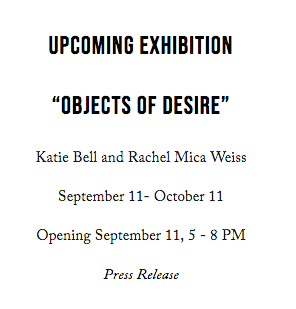 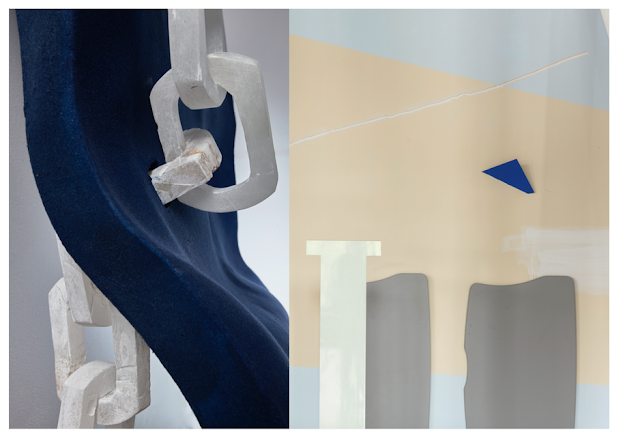 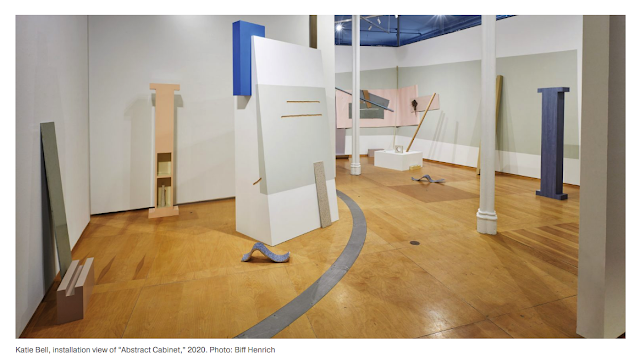 A revised reality, a rebirth, a second act—whatever you call the new existence that Katie Bell creates for the multitude of discarded building materials that she uses in her site-specific installations, one thing is certain: these materials, manufactured for a specific purpose, have broken free from their original identities and uses, taking on entirely new reasons for being. In Bell’s recent installation Abstract Cabinet, the result was a riotous assembly of forms that did not appear to go together but in fact cohered quite successfully, due in part to the restrained, almost uniform color palette and the thoughtful placement of objects within the composition.

Earlier in her career, Bell painted still-lifes of living rooms that she made herself. She became so obsessed with the construction of the rooms, and the placement of items such as a used couch or a strip of wallpaper, that she eventually skipped the paintings to focus on the rooms themselves. She uses common materials such as drywall, wood, linoleum, laminates, countertops, and hot tub fragments to create what are now highly abstracted still-lifes in three dimensions—the couch that was once discernible may now only be found in a fragment. She fabricates some of the features in her installations herself, but mostly she scouts the city hosting her work to find discarded materials for repurposing.

Bell likens the objects in her installations to actors, each one playing a role as they are brought together to produce various scenes. In Abstract Cabinet, an aged granite slab commingled with a pale purple sheet of laminate. In the center of the room, four disparate objects—a spring, a copper pipe, a wooden square with a circle carved out of it, and some metal tubing—sat across from one another as if they were about to have a meeting or a meal. A small, curved piece of a hot tub inched along the floor, a kind of fiberglass worm finally liberated from its utilitarian existence, moving toward an unknowable destination.

Bell references a number of influences in her work, some of which come from the early 20th-century Russian avant-garde, in particular the philosophies underpinning Russian Constructivism and its influence on live theater, which resulted in the stage set becoming as important as what was going on within it. Bell applies these concepts to the architecture of the space in which she is working. At Hallwalls, the odd, moveable walls that don’t quite reach the ceiling and the slightly decorative, possibly intrusive columns that sit mid-gallery were activated by her installation and became part of its theater. Bell also references Russian artist El Lissitzky’s Proun Room (“Proun” is an acronym for “project for the affirmation of the new”) in which the geometries of his abstraction weren’t just to be looked at but could be entered and experienced. It was a radical blurring of ideas and boundaries that echoed El Lissitzky’s philosophical and conceptual leanings.

It takes a while to acclimate oneself to Bell’s work. Walking into one of her installations is like walking into a very bright or very dark room, and you need a few minutes for your eyes to adjust. Once they do, you find that what is happening is downright fascinating. It is a quietly whimsical, almost comical world, where things are not presented or acting in any way that our normal perceptions would anticipate. In Abstract Cabinet, the juxtaposition of one object against another brought about delightful new associations. It was an absurd but happy gathering, and it was satisfying not only to observe, but also to move among its unusual cast of characters. 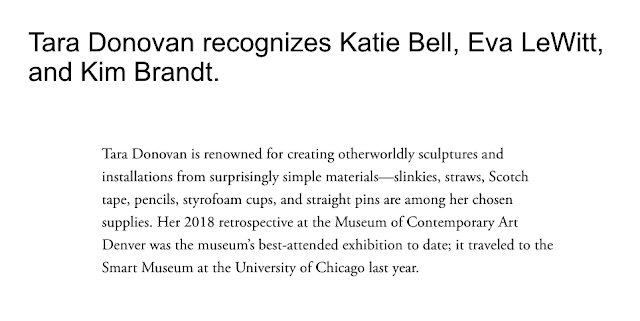 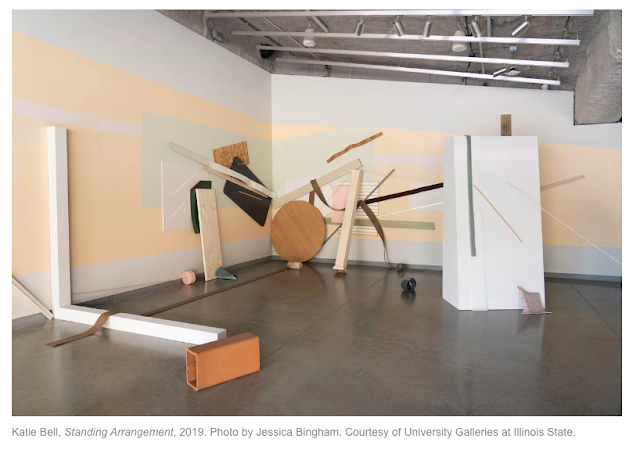 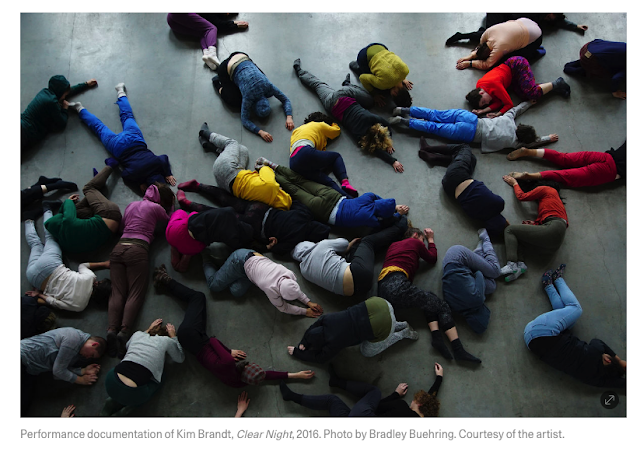 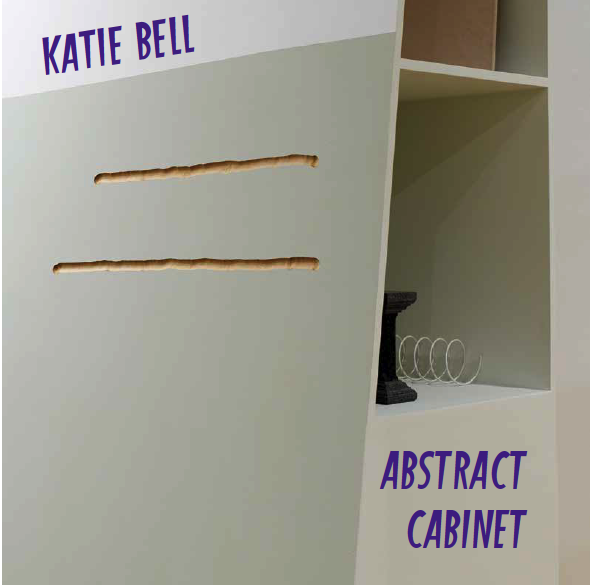 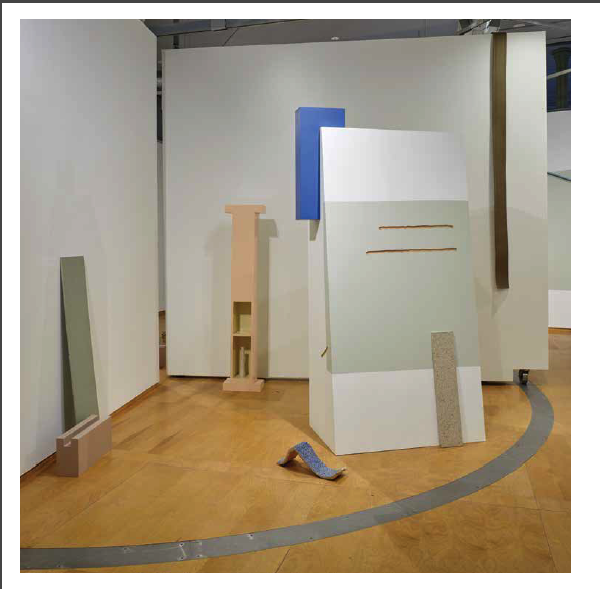 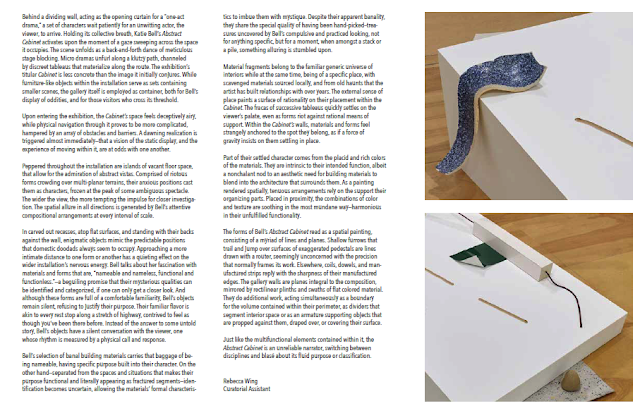 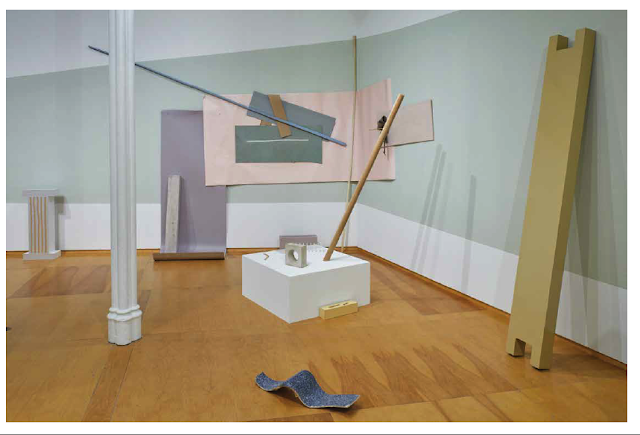 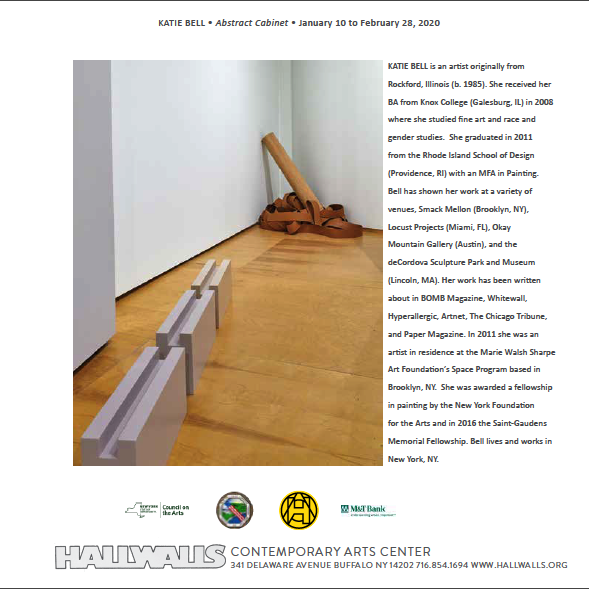 Link to pdf file of catalog here.
More info on my show here.
Posted by Katie at 1:46 PM No comments: 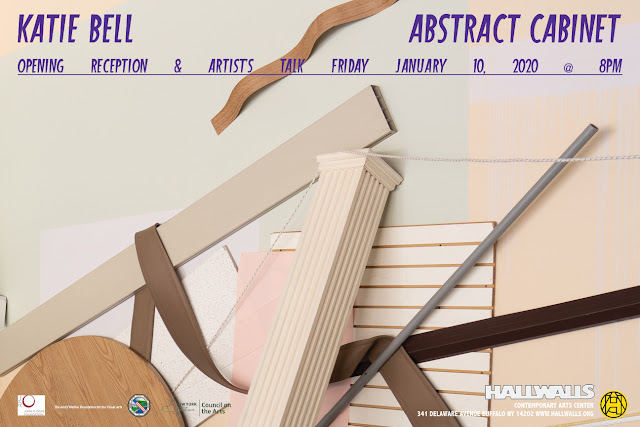 For more info: https://www.hallwalls.org/visual/6177.html
Posted by Katie at 1:27 PM No comments: